I probably spoke too soon about the chest infection, and it has been a horrific few weeks in work (undergraduate programme closed, no forward planning but a tidal wave of daft paperwork) – but walking is therapy so we are back to it. Rachel and I have walked the Rhymney Valley Ridgeway from Machen to Rudry so yesterday’s task was to check out the link along the Machen Forge Trail (more on this at http://your.caerphilly.gov.uk/countryside/sites/your.caerphilly.gov.uk.countryside/files/pdf/walking/2012%20Stroll%20On%20Machen%20Forge.pdf). It works very well as far as Caerphilly but then the problems start. Machen has two pubs (the Ffwrrwm Ishta is closed at the moment for renovation but is reopening) and local shops.

Follow the line of the Ridgeway down to the main road, turn right, then left down Forge Road. A new footbridge crosses the river  alongside the narrow road bridge – good views back, and down the river.

Turn right along a very minor road and walk upstream, passing Green Row, originally the barracks built for the pit sinkers. When the road bears left and away from the river, take the track straight on. 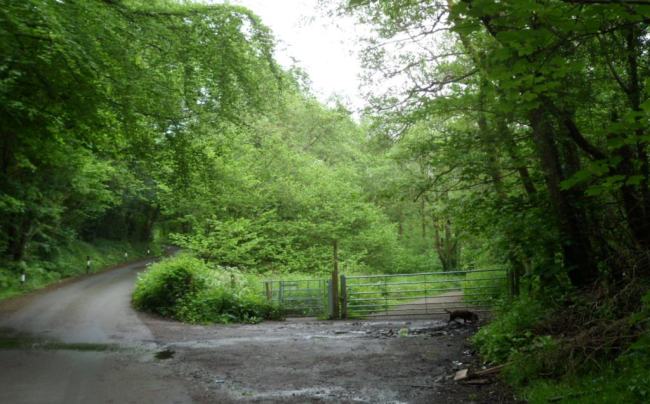 and the stables for the pack ponies who carried iron and coal before the railway was built.

(You can get to this point by walking through Machen and along the cycle path then crossing a new footbridge.) 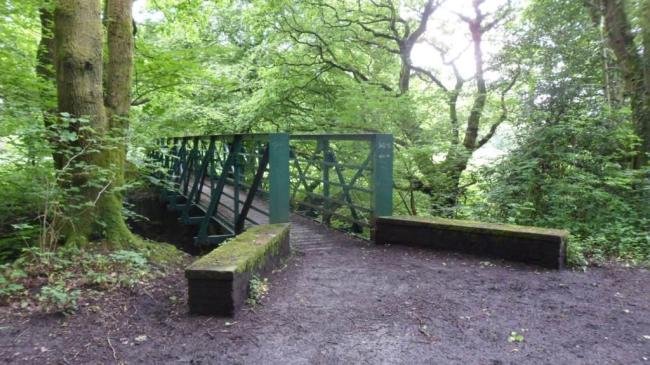 The path climbs up to the railway embankment and down again where bridges are missing. The stonework of these bridges is magnificent – huge quoins carved to exactly the angle of the  line.

Victorian public infrastructure has such confidence in its permanence – none of that nonsense about the cheapest quote.

and emerge in Waterloo village.

From here we took the drier road route to Garth Place (https://cistercianway.wordpress.com/2014/05/04/cistercian-way-machen-to-caerphilly/) to check out the pub. Pub icons on OS maps are no longer reliable as so many rural pubs are closing. It’s ironical that we have a drink problem but we are losing pubs that were the centres of community life. They have almost become part of our past – so much so that the Folk Museum in St Fagan’s has abandoned its Welsh nonconformist temperance identity and is rebuilding a Cardiff pub as part of the industrial area of the museum.

The good news is that the Rudry Arms in Garth Place is still open – the bad news is that it’s only open during the day on Saturdays and Sundays. So weekday walkers will need sandwiches. Oh, and it’s in a street called Starbuck Street but I couldn’t see any sign of that either.

Garth Place to Caerphilly is a lovely walk over Rudry Common with glorious views north to Mynydd Machen and Mynydd Eglwysilan. From the Van, walk down hill then turn right along Cwrt Ty Mawr and right again on the Van Road, straight over the roundabout and into Caerphilly.

We walked from Caerphilly to Groeswen as part of the Cultural Olympiad ‘Cauldrons and Furnaces’ pilgrimage on 2012 – but we did it in torrential rain and I have no idea where we went! The Sustrans cycle route 4 goes through the castle park. It starts well – a path around the castle moat with geese and ducklings – 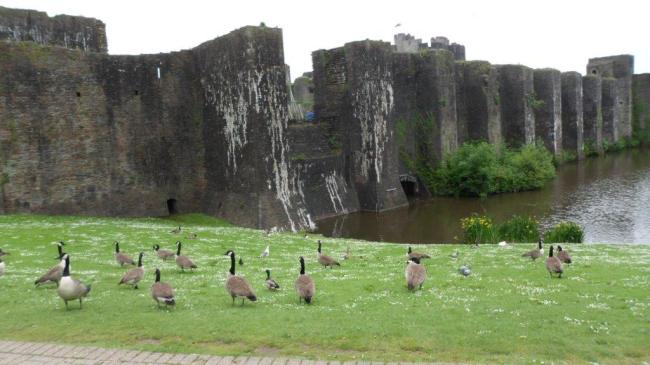 crosses Crescent Road, through the car park, up a ramp 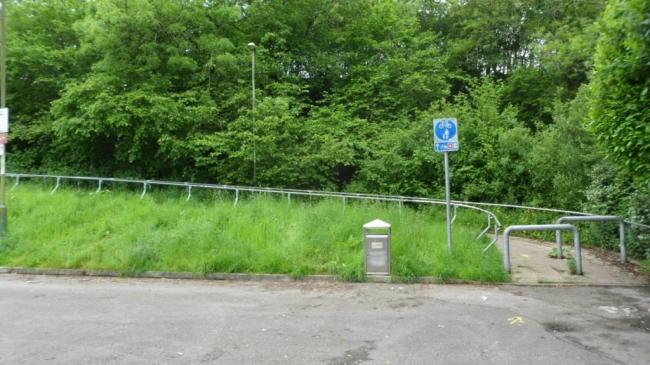 and under the railway line.

There’s a rather awkward wiggle through the housing estates

and across a main road, then round the backs of more houses, through the park and more back streets to the road up Caerphilly Mountain. Cross the road and keep on the cycle path but where it turns left, go striaght on the the big roundabout. Here you have a VERY difficult road crossing and you are back on the line of the Ridgeway, across the fields to Groeswen.

Cara and I got bored with this and tried to find an alternative but there really isn’t one. The other side streets in Caerphilly just get you back to the main road. There are footpaths through the park but they too lead to main roads. If the route is going into Caerphilly we’ll just have to stick with the cycle route out. The alternative is to stay on the Ridgeway – it’s a lovely walk along the ridge between Cardiff and Caerphilly but goes some way to the south and makes for a very long day’s walk. We can put both on the web site and give people the choice.

2 thoughts on “Wit’s forge and fireblast”